The United Kingdom is the fifth-largest trading nation in the world and its economy is largely dependent on international trade. This has led to many small to medium-sized enterprises (SMEs)  increasingly looking overseas to trade internationally, with consequent benefits and disadvantages.

There are both modern and historical reasons for the UK’s reliance on international trade. Regardless, the current status of the UK in this regard is primarily due to recent economic changes.

How Does Trade Deficit or Surplus Impacts Currencies

1. Overview of the UK’s international trade

The UK is dependent on imports for almost all of its copper, ferrous metals, lead, zinc, rubber, and raw cotton. It also imports most of its tin, raw wool, hides and skins, and many other raw materials. One-third of the UK’s food is imported, with demand for fruits and vegetables often being supplied by countries with a warmer climate such as Spain and even parts of Africa. This dependence has led to the UK government traditionally providing huge support to free and unrestricted trade, as well as championing many international trade organisations. This, of course, is all set to change as the UK plans to leave the European Union where the trade will almost certainly be diverging away from its current free trade arrangement with the EU in one way or another. But ultimately with the aim of establishing greater and more favourable terms with trading partners across the globe. The UK has always had  very few restrictions on foreign investment too and it’s likely, now more than ever, the UK will be looking at ways to encourage further foreign direct investment following Brexit

Aside from the lack of restrictions, the UK’s large and growing economy makes the UK a particularly popular investment location – the second-largest investment destination in the world. This allows the UK to fund the trade deficit caused by its reliance on foreign imports. 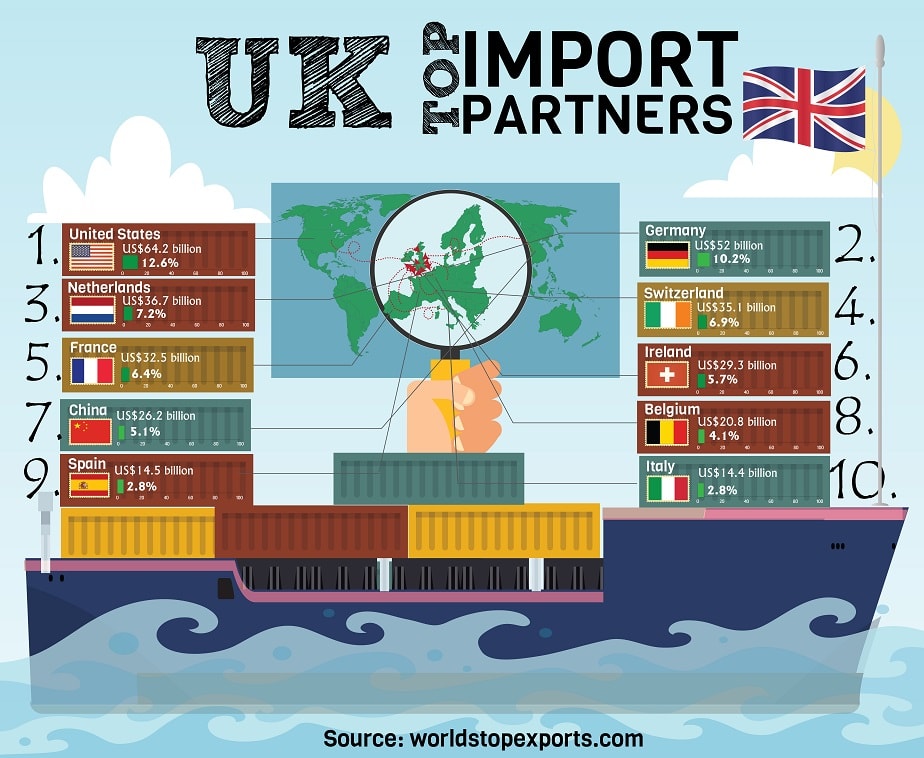 Webmaster? You are allowed to share this infographic in your blog or website, but make sure to keep attribution to this page as the original. Copy-paste the code below.

2. Sectors responsible for exports from and imports into the UK

In terms of goods the vast majority of international imports to the UK are car’s, gold or resources such as petroleum. .  Most of the UK’s exports are in cars and medical equipment.

In 2017, the following sectors were responsible for most of the UK’s imports

In 2017, the following sectors were responsible for most of the UK’s exports:

As well as these physical goods it’s important to highlight the services sector where Britain performs the strongest. The UK’s combined financial and related professional services trade surplus was around £83bn ($107bn).

A major factor in small businesses’ reluctance to trade internationally is currency volatility. While banks allow big countries, transferring values of millions of pounds, to hedge their exchange rates, the service is generally not extended to smaller companies.

Thus, the recent increase in independent Forex companies, which offer more functional services than banks even to small companies, may have a direct effect on the growth of international trade among SMEs.

4. Overview of currencies used when invoicing imports and exports

When companies invoice for international goods and services, they can do so in foreign currencies. Nonetheless, most UK companies are choosing to invoice in Pound sterling when dealing with countries from outside the UK.

The currencies used by a small business for invoicing imports to the UK consist of:

The currency invoiced does, however, correlate highly per sector, with factors particular to the field coming into play. As the often denominated currency throughout the world it’s not surprising to see USD as the most popular invoicing currency. With Germany being responsible for such a large number of imports to the UK (mainly through cars) it’s safe to assume they are choosing to invoice in GBP, as can be illustrated when you head down to your local BMW dealership and all prices are seen as British pounds. SMEs choosing to invoice their international trading partners in GBP will, at the moment, appear cheaper given the fall in the value of the pound since Britain opted to leave the EU in 2016. But had they chose to invoice in foreign currencies such as USD they may have been able to operate at larger margins on their goods as well as providing a more localised and easier solution for their international buyers.

The majority of the UK’s international trade occurs within the European Union, but that may be changing. The US and China are steadily growing in their trade relationships with the UK, while European trade is staying stable or slightly dwindling.

The biggest export partners of the UK are:

The top import origins are:

6. The impact of Brexit for the UK and EU

The UK has a trade deficit with the EU. That is the EU exports more to the UK than the UK does to the rest of the EU. As a result, it is often argued the EU needs the UK more than the UK needs them. But it can also be noted countries such as Andorra have a trade deficit with the rest of the EU too. This is not to say the impact of Andorra and the UK leaving would be the same but that it’s important to delve deeper into the numbers and understand what proportion the level of trade between the UK and EU impacts the UK and EU economies.

One thing is for sure, had the UK crashed out of the EU on the 31st March 2019 with no deal it would have been a total disaster. The aim of the UK’s International Trade Minister, Liam Fox, was to agree with a continuation of trade deals with all of the 69 countries the EU had a trading agreement in place. By the time the 31st March came around the UK had agreed with trade arrangements with just 7 countries accounting for £16bn out of £117bn in trade deals. The better news is that at the time of writing (June 2019) the UK has now secured continuity deals accounting for around 63% of its international trade as it stands. Mapping over the existing terms the UK currently enjoys by being part of the EU.

UK businesses are now looking further afield for international development opportunities with long-standing partners such as the US and newer trading partners in Asia. This is especially challenging for SMEs, as they struggle to find access to markets outside of the EU. The government has been assisting them in gaining access to faster-growing markets, such as South Korea and China.

The markets are changing, and international trade is vastly different from what it once was. The UK, however, remains one of the largest trade destinations in the world.