Low consumer confidence is having a massive impact on the pound. Since the UK voted to leave the European Union in June 2016, the Pound has become significantly weaker, with financial uncertainties over its future prospects looming large. In 2015 the pound was worth around 1.44 Euros – but fast-forward two years and the two currencies are almost equal in terms of value.

The effects of the Pound’s decline are clear in the property market, which is usually a good indicator of the strength of the world’s economies. In 2017, the Pound buys less than you may think.

In the UK, £550,000 will get you a one-bedroom flat in East Dulwich, London. It’s a rather typical going rate for the convenience and closeness of the capital – but paying £11,000 for each of the flat’s 50 square metres feels excessive.

You can afford many more home comforts for half this amount in other countries.

On the island of Lanzarote, a three-bedroom villa with views of the sea and surrounding countryside costs £480,600 –three-quarters of the price of the London flat. On the Spanish mainland, a spacious five-bedroom mill in Andalucia can be yours for £282,354. With two bathrooms plus a terrace, it averages out at a mere £695 per square metre.

Albania might not be known for its seaside retreats, but a seven-bedroom villa on the coast for just £454,515 is bound to make anyone bring their buckets and spades. Spread over four floors and with two kitchens, it’s almost £100,000 cheaper than the London flat.

They say an Englishman’s home is his castle – and an actual castle in the historic Rhône-Alpes region of France is up for grabs at a little over £400,000. With 11 bedrooms, two bathrooms and an extensive system of cellars, this majestic property are still 27% cheaper than the modest London flat.

But why settle for a flat when you can own an entire island? It may seem like the habit of billionaires, but a private island of Belize has sold for an affordable £291,171. With a jetty, pool and ultimate seclusion, this island is the stuff dreams are made of – and it could be yours for a fraction of the cost of a London flat. 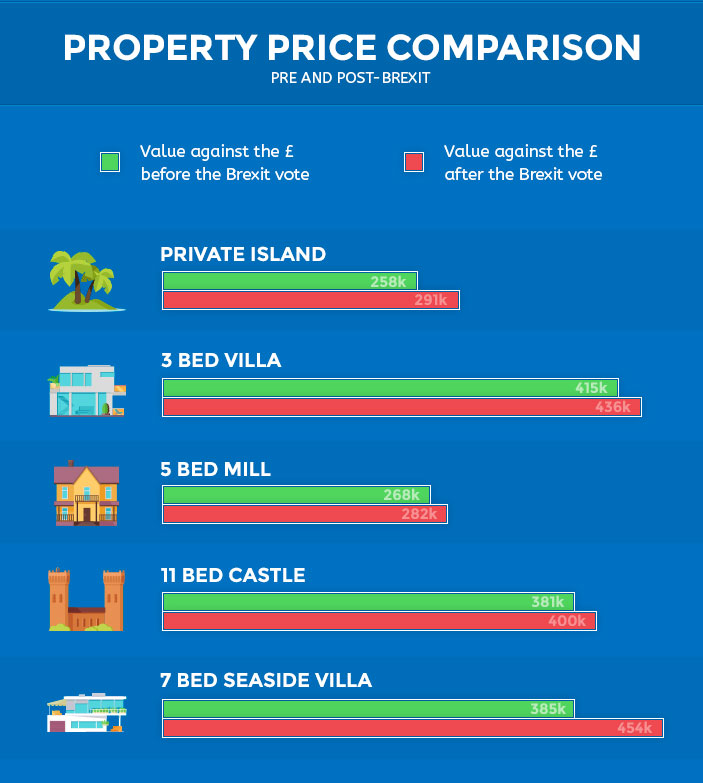 Are These Two Really Comparable?

It should be noted that you can’t really compare a whole island in Belize to a flat in London by any means. There are serious hassles involved with buying an entire island. Unlike a flat in London, a big castle somewhere has its fair share of maintenance costs. If you decide to move there permanently, you will be spending a significant portion of your time maintaining the property.

So why did we decide to create this infographic, if the two are not really comparable? The reason is to show how absurd are the current property prices in London. To be able to obtain an apartment worth living in you have to be a very high earner. London has always been a wealthy city, but current trends lead it to an unhealthy homogenisation.

We have not included USA property as a part of the infographic above based on the fact the USA real estate market doesn’t have many “castles” and “islands” available but in fact, it is one of the most lucrative markets for both domestic and foreign investors. The average price of real estate in the USA is $207,000 (true for Feb 2018) and that is under £150,000 (with rates true to Feb 2018).